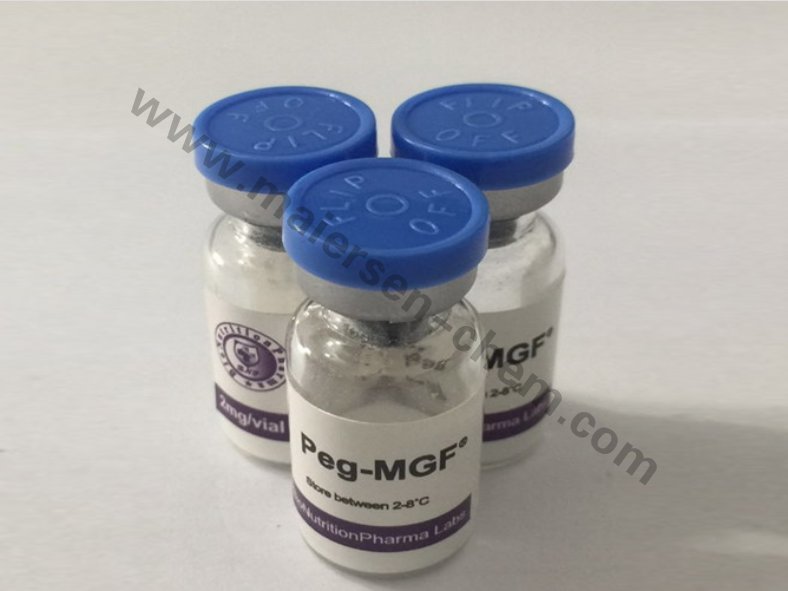 MGF (mechano growth factor) has been used by bodybuilders and athletes for a few years already. After resistance exercise, IGF-1 is released within the muscle. Specifically, at this time, immediately following the mechanical use of a muscle, the IGF-I gene is spliced towards MGF which initiates hypertrophy and repair of local muscle damage. It does so both by activating muscle stem cells and satellite cells, but also via various other anabolic processes. (1) It differs from “regular” IGF-1 mainly due to it’s C-Terminal sequence.

It was first discovered in the muscle by Goldspink, et al. In human muscle, a 49-base insert changes the reading frame in mechano growth factor (MGF) as compared to IGF-1.

When mechanical overload is introduced to a muscle (as by weight training), the IGF-1 gene released and is differentially spliced during the bodies response. Initially, it it is spliced to produce predominantly IGF-1Ec (called the MGF splice variant of IGF-1). This early splicing stimulates satellite cells into activation. Which in turn allows the activation of extra undamaged nuclei to grow new muscle fiber and tissue. The appearance of MGF also initiates the upregulation of new protein synthesis. After this initial splicing of IGF-1 into MGF, production then switches towards producing a systemic release of IGF-1Ea from the liver, which also upregulates protein synthesis as well. The expression of IGF-1 splice variants, over the course of the healing and regrowth phase of muscle repair is thought to be the primary anabolic mechanism by which the body produces new muscle. MGF is available as an injectable peptide, and it has been anecdotally shown that injecting it will cause a response in the area resulting in localized muscle growth.

It would also appear that with regards to age, the young have a better ability to respond to MGF (4), and that the elderly experience a decreased response to MGF which results in a decreased ability to stimulate the growth of new muscle tissue.

In the words of the man known as the father of MGF research:

“MGF is… a prime candidate for gene doping for enhancement of athletic performance.”(1)

I’ve personally used MGF several times and think it’s a really great product. Admittedly, I have only used it in conjunction with Lr3IGF-1, but many (myself included) feel that there’s probably quite a bit of synergy to be found between these two peptides.

I experienced muscle growth (localized) with MGF, but not really much of a strength increase over what I would have experienced with just the IGF. Most users find MGF to be very good for muscle growth and typically use a protocol of 100mcgs injected into each lagging muscle just after working it.

A further discussion of how to incorporate this compound can be found in my article “Peptides: The next frontier in hypertrophy”.

Long by picture，save to album

Please wait while the picture is loaded